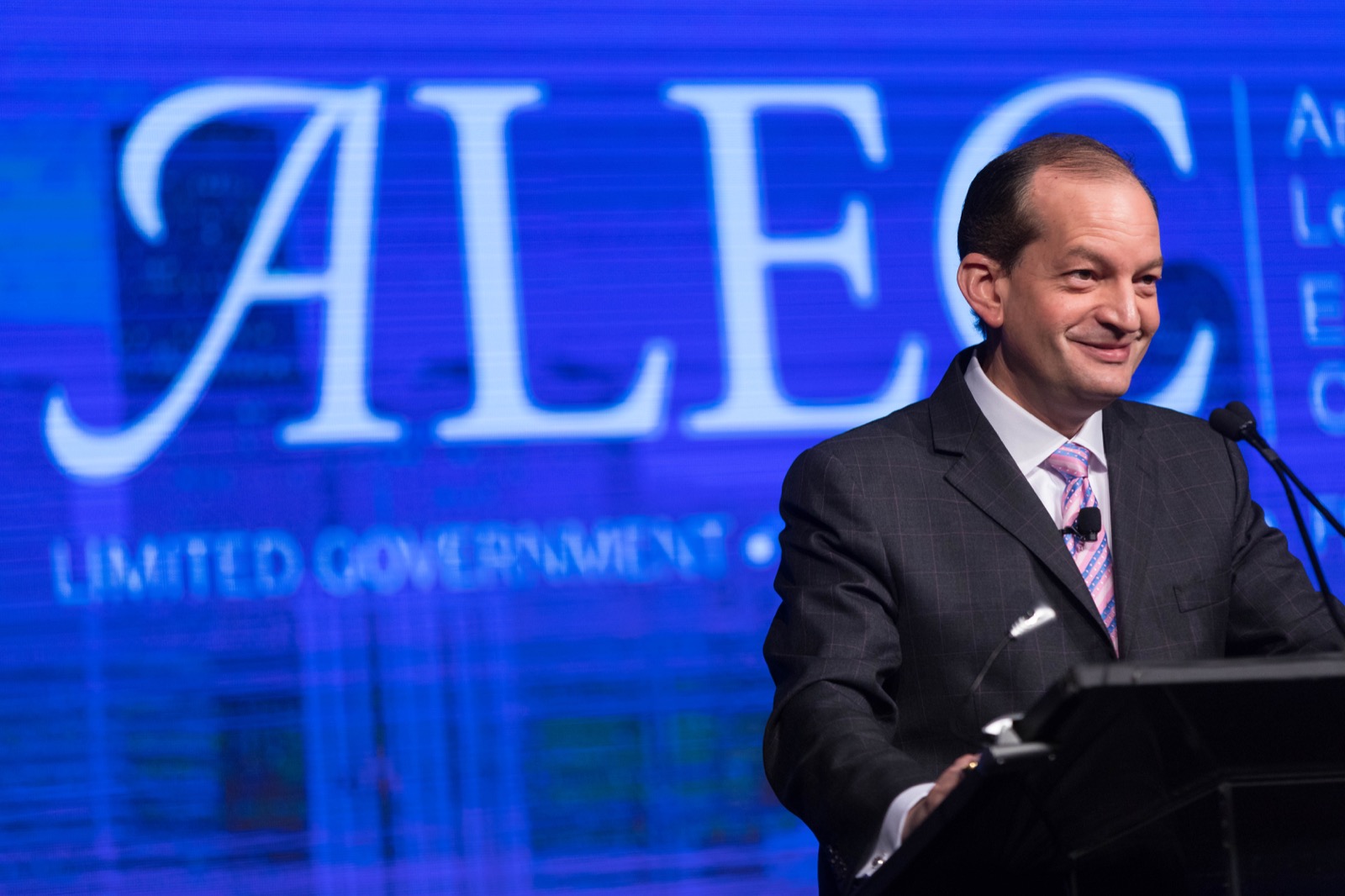 Back to top
Part 2

By its own account, ALEC seeks to “...increase individual liberty, prosperity and the well-being of all Americans by advancing and promoting the principles of limited government, free markets and federalism.”[53] ALEC’s vague and seemingly benign mission statement disguises how this registered tax-exempt charitable organization regularly convenes its members, made up of corporate executives, conservative state lawmakers, conservative activists, and funders, to privately craft self-serving model legislation that advances their agendas away from public scrutiny.

ALEC’s impact comes from its astoundingly broad membership. According to its own website, nearly one-third of all state legislators are members.[54] In 2016, it also counted among its members eight sitting governors, 300 local politicians, and over 200 corporations and conservative think tanks with non-profit charitable tax status.[55]

Nearly one-third of all state legislators are members of ALEC

ALEC’s 2017 budget, the last available ALEC filing to the IRS, was $10.3 million. $8,765,064 of this total revenue stream came from corporate membership dues and grants from conservative foundations, which is equal to almost 90 percent of its revenue.[56]

In its early years, ALEC did not generate any significant revenue from corporations; what revenue it did generate came from radical conservative foundations like the Adolph Coors Foundation and the Scaife Foundation.[57] Beginning in the early 1990s, ALEC shifted its funding strategy to more explicitly seek funding from corporations. The strategy proved successful, such that between 1988 and 1992 ALEC more than doubled its annual revenue from $1.5 million to $3.9 million.[58]

Research indicates that ALEC still receives a substantial number of grants from wealthy far-right conservative donors; the collection of foundations run by the Koch brothers donated more than $3 million between 1997 and 2017.[59]

With legislative members at all levels of government across the country, ALEC has been extraordinarily effective at passing its favored legislation. It has been reported that in 2009, ALEC legislators introduced 826 bills and passed 115 into law.[60] The New York Times reported that in 2011, “...ALEC typically introduced more than 1,000 bills based on model legislation each year and passed about 17 percent of them.”[61]

ALEC is so effective because of the operating model it has perfected. It brings together its members — corporate, legislative, and otherwise — twice a year to exchange conservative and corporate ideas they form into draft legislation that they then vote on, and later farm out to state legislatures to pass into state law. Its signature tactic, however, which has distinguished it from other conservative policy think tanks and organizations, is its use of its so-called “Task Forces.”

In ALEC’s own words, its meetings are “where the action is.”[62] It holds its Annual Meeting each summer, shortly after most states’ legislative sessions have ended. There, corporate leaders, lawmakers, and others with an interest in ALEC’s work come together to attend workshops, hear keynote speeches, and ultimately forge right-wing social and economic policy.

The 2016 Annual Meeting welcomed more than 2,500 attendees, including an undisclosed number of state legislators and more than 200 business executives discussing a range of issues in more than 20 workshops.[63] A leaked copy of the 2015 Annual Meeting agenda revealed the corporate make-up and themes of workshops, as well as the titles of a number of subcommittees and working groups.[64] The annual meetings often attract high-profile conservative keynote speakers, many of whom are in powerful government positions; in 2016, then Vice Presidential Candidate Mike Pence told the audience at the annual meeting in Indiana that he “...was for ALEC before it was cool.”[65]

[65] Bill Meierling, “Governor Mike Pence: ‘I was for ALEC before it was cool.’” ALEC website, August 14, 2016, https://www.alec.org/article/governor-mike-pence-i-was-for-alec-before-it-was-cool/.

The annual meetings often attract high-profile conservative keynote speakers, many of whom are in powerful government positions

Each December, ALEC holds a States and Nation Policy Summit, “specifically designed to introduce new members to ALEC” following the November elections held a month prior.[66] In addition to welcoming new members to ALEC, the winter convening serves as a brainstorming session for the upcoming state legislative sessions and a forum at which corporate executives and high-profile conservative politicians lead “...intensive, in-depth educational sessions addressing issues that will be at the top of state legislative agendas the following year.”[67] Speakers at the 2018 winter convening included Trump administration Office of Management and Budget Director Mick Mulvaney, Secretary of Housing and Urban Development Ben Carson, and Senator Ted Cruz.[68]

Until 2018, ALEC also held a meeting for members each spring, but ALEC eliminated this event in 2019, reportedly in response to at least 366 ALEC-affiliated lawmakers losing re-election in November 2018 and several corporate members cutting ties.[69]

If ALEC’s meeting are “where the action is,” its Task Forces are how the work gets done. Co-chaired by corporate executives and legislators, the Task Forces “bring elected officials, policy experts and business leaders together” to advance ALEC’s profit-driven and ideologically conservative agenda. Each Task Force, like a Congressional subcommittee, covers a policy area and reviews model legislation before it heads to the full membership for a broader vote of approval and adoption. And, although the Task Forces are supposed to serve as a neutral preliminary stage for pending model legislation, the corporate members maintain disproportionate control through veto power and even the ability to remove their legislative co-members at will (whereas corporate members can only be removed “with cause”). [70]

ALEC’s Task Forces were inspired by the Reagan Administration’s “Task Force on Federalism.” Early into his presidency, Reagan convened a working group to bring states and the federal government together to work toward limited government. Early participants included the then national chairman of ALEC, Tom Stivers, and ALEC members John Kasich and Rober Monier. Five years after Reagan convened his Task Force on Federalism, ALEC announced the creation of their own internal Task Forces, each with a thematic mandate, together covering “virtually every responsibility of state government.”[71]

Today, there are 11 Task Forces covering such topics as Energy, Environment, and Agriculture; Federalism; Criminal Justice; and Homeland Security.[72]