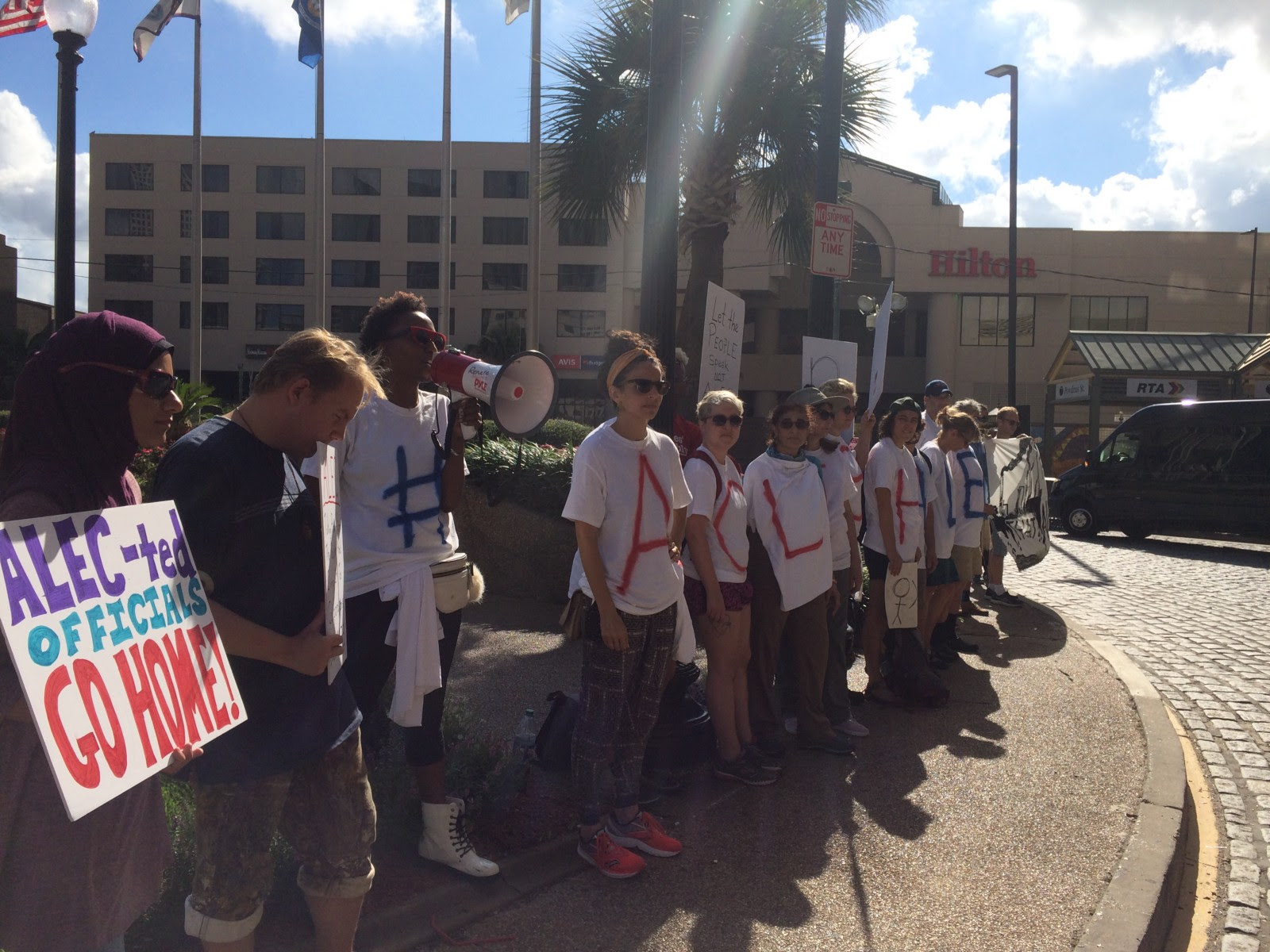 This report will take a close look at the devastating impacts of the activities of the American Legislative Exchange Council, or ALEC, on communities of color across the country.

ALEC is a highly effective incubator and platform for spreading a broad swath of corporate and conservative policies. According to its own description, “ALEC lets legislators take a good idea and turn it into a perfect fit for the people of their state.”[1]  In reality, ALEC brings together conservative legislators and corporate lobbyists to develop and disseminate model legislation that sustains corporate power and white supremacy, which has ensured that ALEC has become one of the most powerful, and least known, platforms of its kind in U.S. politics today.

ALEC’s success as a political platform for unaccountable interests is indicative of a more general phenomenon known as “corporate capture.”  In a system of corporate capture, private industry seizes control of the authority of the state, writing legislation and public policy for the general public behind the closed doors of a CEO suite. In the case of ALEC, its structure and influence provide such a reach into U.S. politics that it resembles the elements of a shadow state apparatus.

This report considers ALEC as a case study of corporate capture in the United States. Through its network, conservative and corporate interests have “captured” our political processes to harness profit, further entrench white supremacy in the law, and target the safety, human rights, and self-governance of marginalized communities.

[ ALEC's ] commitment to proliferating racist and exploitative policies is a profound threat to communities struggling for freedom, equity, and historical justice.

As organizations working within and alongside those targeted by the laws ALEC promotes, we are concerned not just with process, but with outcome, and particularly the outcome as it impacts communities of color. While white supremacy and corporate greed were not born with ALEC, its commitment to proliferating racist and exploitative policies is a profound threat to communities struggling for freedom, equity, and historical justice.

The case studies and analysis in this report are centered on the experiences of impacted communities and reveal how corporate capture is an inherently reactionary phenomenon. Those in power —  in this case, the dominant racial and economic classes —  commandeer the machinery of government to suppress dissent and  stave off socio-political changes aimed at a just redistribution of power and resources, using ever more desperate means of enforcing a racist and exploitative economic and political status quo.

Part 1 of the report will provide an introduction to ALEC. Through a close examination of its history, mission, and internal workings, we consider the group’s evolution and highlight key moments of resistance. ALEC was born as a political organizing network for evangelicals resisting the victories of the Civil Rights Movement. Twenty years later, finding it difficult to fund only racist conservative policies, the organization opportunistically partnered with newly politicized corporate entities. The result was the formation of a mutually beneficial financial and political partnership that brought together conservative religious fundamentalists and the economic elite of corporate America, who were both determined to control the levers of political power to continue reproduction of the socio-economic and political circumstances that perpetuated systemic economic and racial injustices. Here we will also chart the rise in recent years of the efforts by racial justice groups to successfully expose ALEC’s deadly impact on Black and Brown lives.

Part 2 of the report will discuss how ALEC currently operates its platform. A tax-exempt charity, ALEC’s political strength is in its legislative membership, but the institution is financially solvent thanks to its dues-paying corporate members. Alarmingly, up to a third of all state legislators are members of ALEC, as are several hundred corporations. ALEC brings these lawmakers and corporate executives  together behind closed doors twice a year at its convenings. Utilizing the power of ALEC’s platform, members of its notorious  task forces write and vote to approve prefabricated draft laws, and then ALEC lawmakers commit to funnel the draft laws into state legislatures across the country.

Part 3 provides case studies on the impact of ALEC laws on communities of color. We examine four specific areas: “Stand Your Ground” laws; Voter ID laws; anti-Boycott, Divestment, and Sanctions laws; and Critical Infrastructure laws. Each set of laws relates to ALEC’s mission and history differently but is fundamentally aligned with the interests of the group’s corporate and conservative members. This section offers analysis of ALEC’s role in supporting the proliferation of these laws and documents the origins as well as the harmful effects of the laws on communities of color and their allies.

Part 4 invites reflection on the ways  racial justice advocates can resist ALEC’s sophisticated and coordinated attacks on communities of color. It draws on successes in social justice movements that have faced similar opposition and offers national and international political and legislative tactics to mitigate the harms of corporate capture and transfer power back to the people.